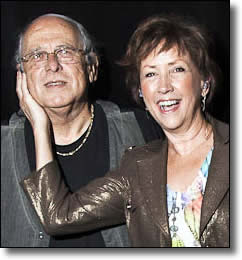 When John and Judy met and started making music together, the #1 record in the country was Roberta Flack's 'Killing Me Softly", and Bill Withers was #7 with 'Lean On Me'. After decades of studio and stage work, Judy's hit solo career, getting off the road and John's retirement from drumming (or so he thought), they are now coming full circle to start something brand new. For the first time they are writing, performing and recording their own music.

The spark that led to the album Here We Are started with a conversation while watching TV. Both had histories of great success on the road and in the studio, but had stopped making their own music for a few years. One night after watching a broadcast of James Taylor and Carol King performing together, they decided that if they could make music with that level of mastery in songwriting, musicianship and vocals, it would be worth the challenge of starting a new musical journey.

They put together a band and began rehearsing and playing shows with some of Judy's old songs. They received two standing ovations at their first showcase and rave reviews, which stoked the fire.

Before long they began co-writing songs for a new recording - something they had never done before. They decided that the heart of the music they wanted to make would fit within the Americana genre. Musically free with emotionally-compelling lyrics, grooves and melodies, Judy's signature vocals and John's drumming style would create the tone that would bind the songs together. They wrote new southern blues tunes, a Louisiana groove started by their son Peter, a pop ballad, a funk-flavored groove and a mesmerizing instrumental. They added a cinematic anthem Judy co-wrote with Cassandra Kubinski.

When the songs were finished, the Rodmans called on friends who are some of Nashville's elite musicians to play on the album. The resulting tracks captured the creativity, mastery and friendship in the air at Mainframe Studio. They had come full circle.

"In my career in music, I have had perfect moments, watching Rudolf Nureyev from the orchestra pit seemingly suspend in air, played some really good jazz one night with Marvin Stamm sitting in, played "The Pines Of Rome" where the orchestra played as one, handed my tambourine to Sammy Davis, Jr. so he could sing "Mr. Bojangles", played in a Memphis cover band where I met Judy. The music we created this week in the studio tops them all."

"I've been at the top of the Billboard charts, featured on prime-time TV and performed on some of the biggest stages in the world. This is the best music I've ever made. Creating it now with John, after all our years together, is profoundly fulfilling. It's really rather miraculous."

Here We Are will be released on March 24th, 2015. The music of John and Judy Rodman is sure to please lovers of great grooves, melodies and lyrics.

About and John and Judy

John is a veteran drummer with Memphis roots whose playing credits include classical percussionist with the Memphis symphony, live tour drummer from amphitheater to primetime TV, and staff drummer in the recording studio for one of the world's largest jingle companies.

Judy is an award-winning recording artist, stage and television performer, studio producer, public speaker and songwriter. Her credits as a solo artist includes multiple awards such as Billboard and Academy of Country Music's Top New Female Vocalist, as well as her #1 'Until I Met You" and several other top 10 singles. She co-wrote Leann Rimes' #1 Hit "One Way Ticket (Because I Can)." More credits listed at her website www.judyrodman.com.

They are based in Nashville, Tennessee.